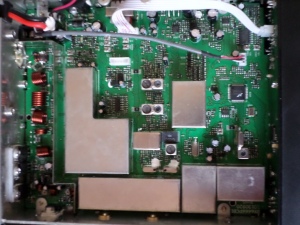 Firstly the echo adjustment can be seen, yep shit picture but it is there and labelled (w900) VOL and DEL (w901)so can be changed as Volume & Delay. Just below where the programming cable is located into the board.

So this radio has been touted as the Lincoln II Killer. Indeed I mentioned this as well. The radio was touted as something special. Sitting in the case of the AT5289 with the passive heat-sink on the back, generous power on all modes and a nice amount of swing on AM it has the hallmark of something that can become something special in time.

So let me tell you about it in the first 24 hours since it arrived from NEVADA (www.nevada.co.uk) I paid for the radio PAYPAL and the shipping was paid via Nevada. Email issues with my provider was meaning none of the emails from the MD of Nevada landed (and still none landed) so that is what happened. It is documented here, the radio was not a gift, or some light hearted way to get some good reviews. It is an owned for radio.

From the box the radio has a scratch at the back right hand side. Not much but a small mark (Qixiang standard with other radios too) and the radio was obviously opened and tested by how the cable was inside the box. BUT all companies do this so nothing out of order there. Cable is fitted from the radio, no joining which can make some installations a little tricky but I understand some resellers are already changing this to make it a joined cable and not 1 solid line. Length is fine, no issues at all.

Noticeable things are the radio is small, real small and has a nice build quality to it. It looks professional and Yaesu’esque. The channel change sometimes misses frequencies like the V1 Lincoln so maybe the same technical inside. This needs to be changed and made the same as V3. Minor detail but huge outcome on a £200 radio. PC Programmable advertised but no software at the moment and no release date or anything mentioned from China.

Easy to convert to export mode and indeed the volume is rather low. I set mine at 12 and was not loud at all. Maybe will be changed when mass production starts? Slot for CTCSS and mounting point all seen and no issues. No smoking gun from the insides other than the radio gets real hot. Grill those chickens sort of heat.

VFO Mode: I have read this and seen it said the radio has VFO Mode. The Lincoln II can go from 25-29MHz and when it reaches channel 40 it goes up a block. This one does not have it. Gets to channel 40 B and then goes channel 1 B so the idea of a VFO is not on my radio. Serial number 00021 from the box. There is nothing I could see in the menu, the manual is also quite good and well thought out so no issues to adjust and make memory channels. It is dead simple to do.

Driven Audio is good, power is super and variable really quite well (on my radio) and does not start to go up from 3/4 turn it seems fluid and well working. Same is with the RF Gain, no noise issues and the s-meter seems to be really laid back. My mind like with V2 Lincoln it needs more fluid motion but no spikes so far, the s meter is actually lazy like in the Cobra 148GTL-DX days.

Not at home so only small tests here and there when there is time. Maybe at the weekend from Slovakia I can spend more than 1/2 hour on air and see. And why reference it against a Lincoln V2 well that is the piece that matches it around release date.

Audio sounds excellent on all mikes tested here. Sadelta, RF Limited CR577, Turner +3B
Power: Superb and does in excess of what is quoted. Mine now turned to 50w SSB, 40w FM, 10w AM
Size: Super small, loads of roger bleeps to annoy people, easy to read display
It is sure the best Anytone radio that they released for themselves under in house brand.

Well it really does get super hot so if located inside a shelf in a car can cause issues
Controls generally feel cheap
Change the channel change. It is not the right one for a radio of £200 swap it for a V3 Lincoln one
No software on the horizon at the moment
Scratched case? In 2014 come on. People paying the money don’t need the scratches
NO VFO Mode. Maybe some radio had it as reviews said they had it. Mine does not so can only base my view on that

So this is a radio that needs more on the air time. There are videos of how it sounds now online. Videos from Poland about it since long time. I reserve my opinion till hear some news from the maker. I asked a couple of things and wait the reply. Would I go out tomorrow and buy another one? Yes and not think about it other than to check for marks on the case and turn back the power a little.

Qixiang seem and really do learn quickly. Would this radio have been possible let us say 18 months back? No is my answer but a lot has changed in the time since then. Input into there business via President, Alinco & CRE along with others that I know has changed them I think. RF Rain, EKHO days are away and hopefully forgot also.

If I had contact with President or with Qixiang as I sit now writing this on the phone. Add 12m to your radios like with the Stryker. Don’t go conservative the same export modes all the time. Make the radio 10m/12m and then expandable to 10/11/12m Like with the SR955HPC Stryker.

Donation to the blog