Many people asked about the Avanti Kappa, indeed I tested one as a prototype and it was working really very well and then there came onto the market the Kappa II and below is a small poster which was found on a website to show current radios so the translation told via google. Some will know the Primo under the Stabo name and add to this there is also a Primo simply with FM and 20w output, and add to this all the bells and whistles from the other radio then something also super interesting. 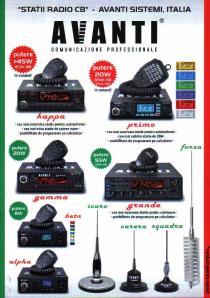 Seems that they are a little off the boil at the moment according to Maximilian who mailed me to pop something on the blog from Avanti and he uses it and loves it, of course my pleasure and the job done. Keep an eye out as they have a version of the Apollo coming along, I saw the test version and WOW it was working super well. Not sure about the release or the released version if you know something then drop me a line and let me know the information.